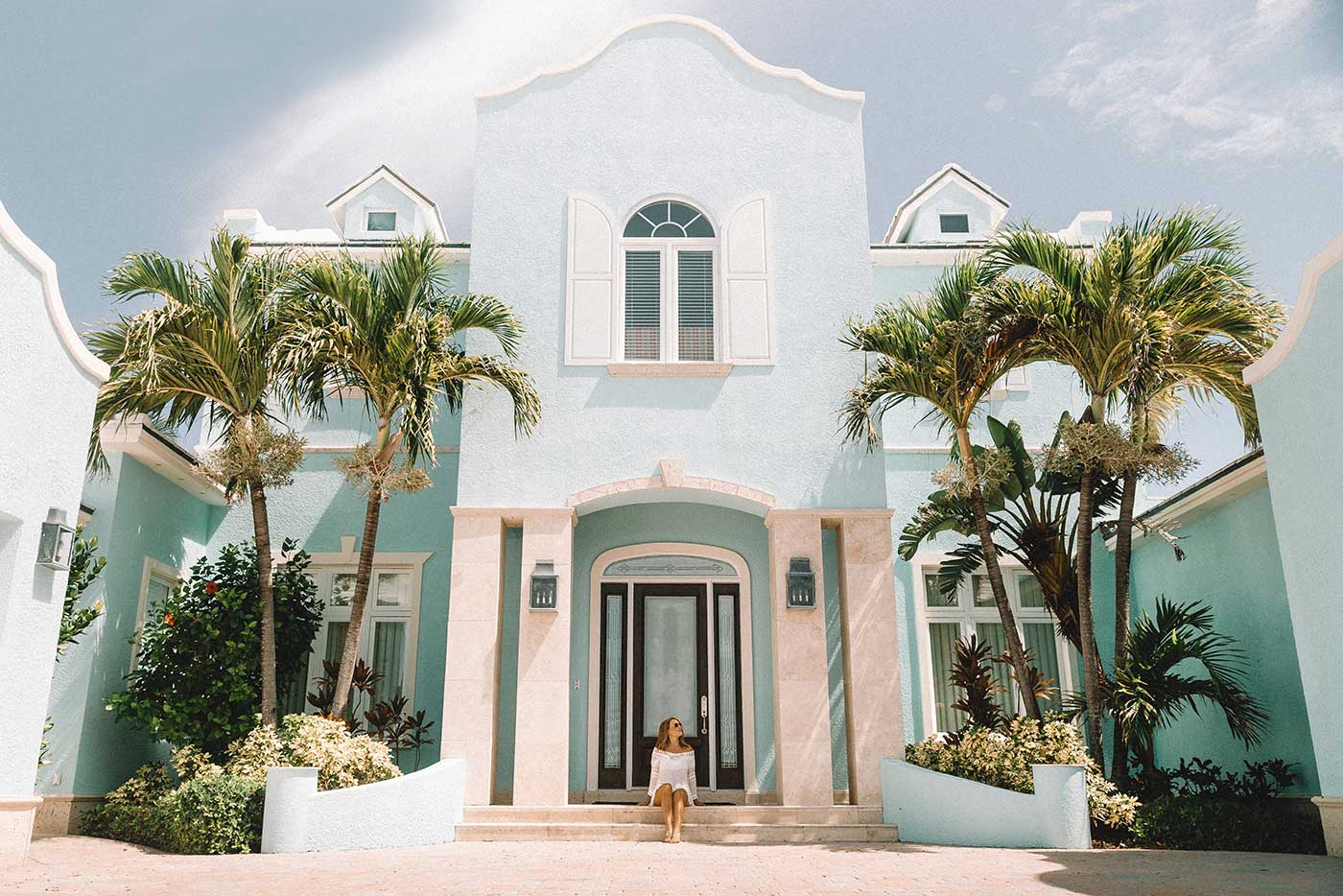 Everyone wants to know the best time to buy, sell or hold real estate. Three factors, explained in the charts below, help you anticipate the best action to consider for 2018 and beyond.

The yield spread has experienced a recent downward trend in 2017 though it remains above the point of concern over an impending recession. A weak, but positive, yield spread indicates little chance of economic recession in the following 12 months. All the same, the figure suggests a sluggish rate of growth.

Home sales volume experienced no long-term change from 2009 to 2015. However, sales volume trended flat to down in 2016 and 2017 due to a lack of low-tier housing availability and home prices rising ever more beyond the reach of homebuyer-occupant incomes. Home prices in most markets continue to climb gradually in mid-single digit percentage increases, having shown signs of leveling off in high-tier markets. Prices will decelerate in 2018 and possibly slip by the end of the year in reaction to rising mortgage rates and disproportionate pricing. 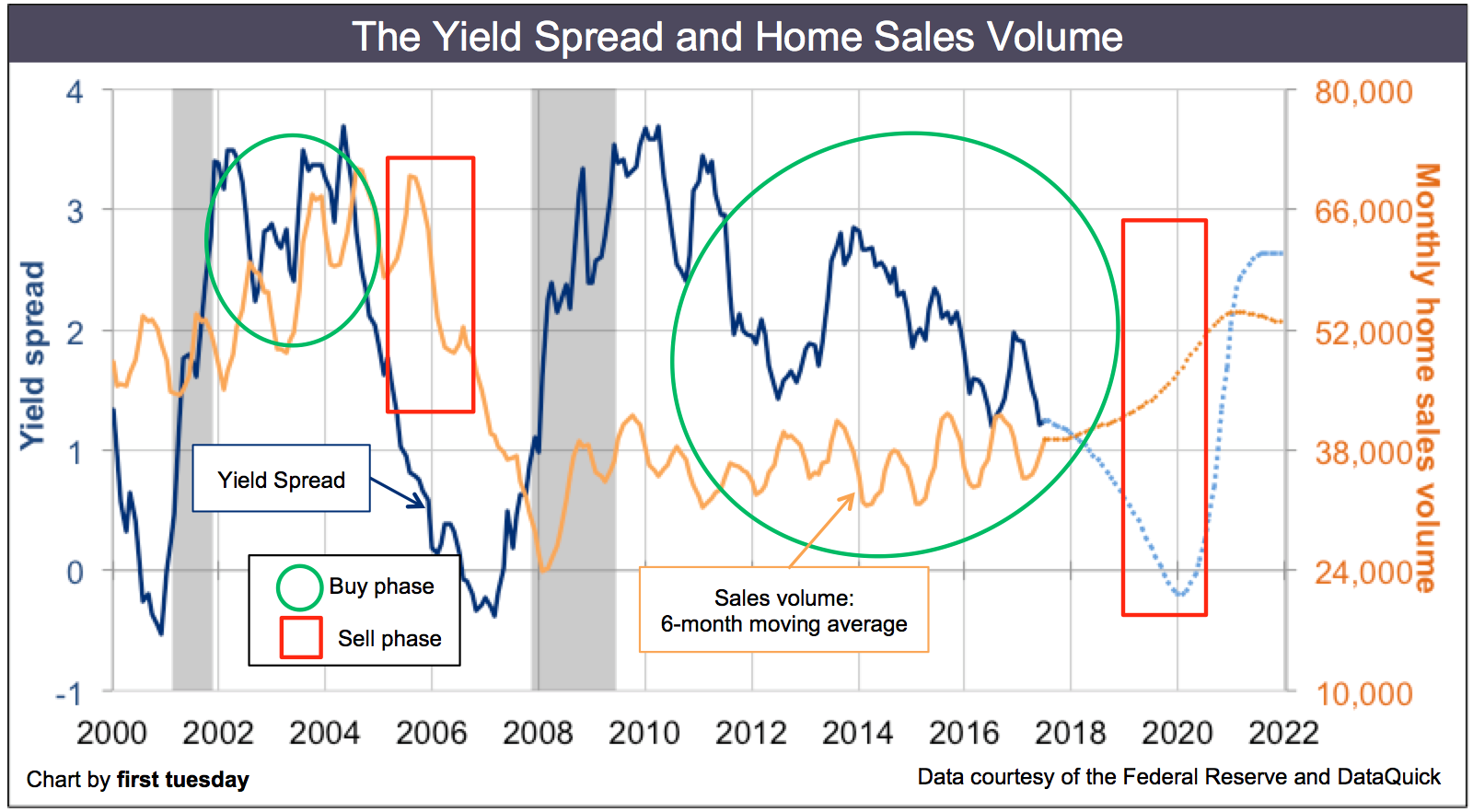 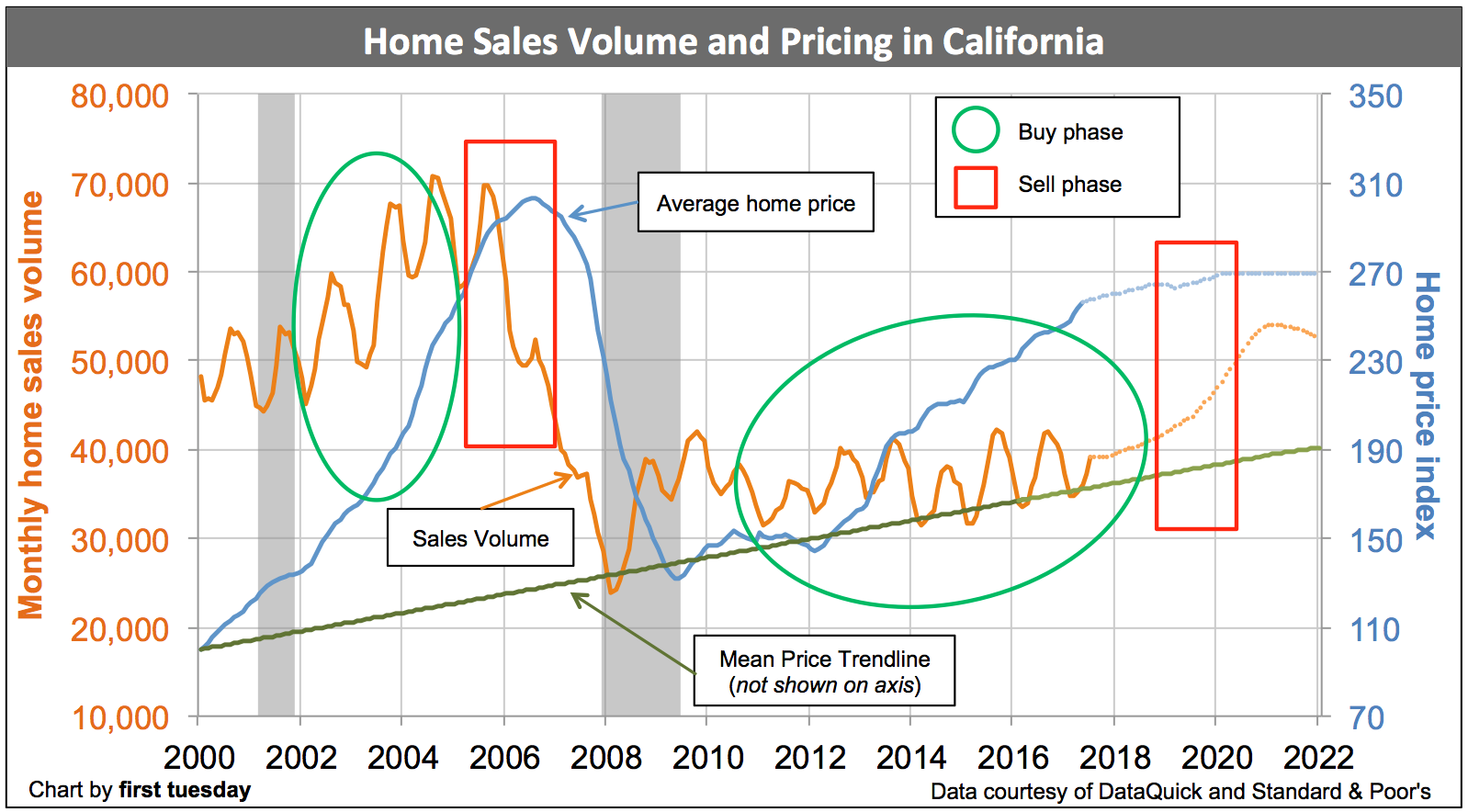 These market charts are your investment planner. They tell you when a business cycle will enter a buy phase or sell phase.

The best action for today’s housing market can be found by examining three factors:

As of August 2017, the yield spread was 1.20, down from 1.28 one year earlier. Today’s yield spread is at its lowest point since 2009. Thus, a less vigorous general economic outlook in the next 12 months is likely. Further, the excessive home prices holding down today’s meager home sales volume portend a flat to slipping housing market for 2018.

As depicted in Chart 2, home sales volume has shown a dramatic change from quarter to quarter, but little long-term change since 2009. Total sales in 2015, 2016 and 2017 were essentially the same.

California’s flat home sales volume continues the bumpy plateau recovery lasting these past eight years and counting. A static sales volume forecasts flat-to-falling pricing nine months hence, absent other market influences. However, while sales have been flat since 2015, home prices have continued to increase at a pace faster than increases in wages. The distortion has to do with extra market influences — including:

Likewise, when sales volume is rising rapidly, home prices are also likely to rise quickly, with a lag period of around six to nine months.

Speculator interference in 2012-2013 distorted price movement, causing an unsustainable price bump for lack of anything resembling pent-up end user demand. Home prices were 9% higher in August 2017 than one year earlier in the low tier of California home sales. This price bump is unsupported by sales volume and wages for monthly payments, and thus is unstable.

Price bumps are often misconstrued as cycles in and of themselves. However, they are merely the result of frenzied speculator attitudes in momentum markets to buy low and sell high within a matter of months. These short bursts in rising prices are unpredictable. You are better off not attempting to apply the factors influencing buy and sell phases to these short periods.

How can you tell the difference between a price bump and a more sustainable buy phase? Price bumps are characterized by:

All of today’s signals suggest prices must remain level for several years, or fall in the near future. When home prices eventually match up with mean pricing, prices will rise at the rate of consumer inflation for the next 10 years or so. Currently, we are still experiencing a price bump, though the magnitude of increase has subsided. However, rising mortgage rates will decrease buyer purchasing power and, with the help of increased residential construction starts, exert downward pressure on home prices, likely to level off in 2018.

Long-term investors will hold onto their property until a future sell phase, when home values have had more time to appreciate.

Advanced charting: Buy, sell or wait out the market

The economy — being driven by humans — moves in cycles, much the way people behave as stop-and-go drivers on our freeways. The length of a cycle is determined by the extent and duration of economic excesses (go) and recesses (stop) during the cycle. The recent cycle from which we have emerged — 2001-2009 — had unprecedented levels of excess and recess.

Each real estate market cycle can be neatly divided into three phases:

The Buy Phase: the ideal moment for buying property is the start of the recovery. This phase is characterized by:

The Hold Phase: the phase following the acquisition of a property during the buy phase or after a sale in the sell phase, can be the longest time period in the cycle. Prudent investors patiently bide their time after a purchase, awaiting the boom or bust to play out before reentering to buy or sell.

The Sell Phase: this phase commences with a peak in sales volume. It is characterized by:

The key to successful real estate investing is to look beyond the property’s annual operating income to the end goal: a sale. Whether on a quick flip or after a long-term buy-to-let period, the endgame is to maximize profit on a resale. That is, to sell at a price appreciated beyond the price paid and consumer inflation. Here, timing is the keystone supporting the purchase and sale activity, and thus is the profit.

For investors to sell for a profit, they first need to buy near the bottom to midway in a market recovery half cycle — the buy phase. This is when property prices are closest to their historic mean price. [See Chart 2]

It is rarely, if ever, possible to identify the top or bottom of a market cycle until after it has already passed. However, studied effort makes it more likely.

The best way to demonstrate is with an example from our recent history. [See Figure 1]

The best way to demonstrate is with an example from our recent history.

From 1999-2002, home sales volume declined annually even as home pricing continued its decade-long rise. The yield spread stood at an historic low, averaging 0.95 from 1999-2001. More importantly, it went negative (with short-term rates valued lower than long-term rates) for several months in early 2001. These conditions signaled an imminent recession.

When the Federal Reserve (the Fed) raises interest rates, their aim is to slow the market down, such as reduce the demand for employees. Concurrently, fewer loans are made, and sales volume slows within 12 months. However, the 2001 recession failed to fully materialize. As a result, the recession was unable to work its magic to cool the economy (and real estate prices) since the Fed prematurely bolstered the economy after September 11, 2001.

When the economy is deliberately slowed and delivers mixed signals, prudent investors hold onto their cash and their property. They neither buy nor sell.

After a recession and when the yield spread has increased for a period of roughly six months, investors are to prepare for the beginning of a buy phase. Preparation includes researching location – where and what type of property the investor will buy – and price – how much they will pay.

The actual time to buy? Once the yield spread begins to waver at its peak, as in late 2001/early 2002. As can be seen in Chart 2, 2002 demonstrated upward price movement above the 2001 trough, increasing to a price peak in 2005. After that, prices slipped, then plunged.

The buy phase continued from 2002 through 2004. Preferably, an investor would have bought early in 2002 and waited until 2005 to sell. This waiting game is strategic — wait too long and you may lose money. Or, sell too soon and you may receive less than the maximum return on investment (ROI).

When prices have risen sufficiently for you to meet your profit goals and the economy is delivering signals that the buy period is ending, sell. Sell periods are the shortest, quickest phases of the cycle.

The briefness of the sell phase is due to public pessimism. The general public is slow to trust the market (causing slowly rising prices) and quick to get out at the slightest hint of falling prices (causing a sharp price drop). Therefore, one ignores the signs of a sell phase at one’s peril: it will be over just as soon as it began.

In 2005, both the peaks and low points for monthly home sales volume were lower than the previous year’s, the presage of a price drop nine months forward. This slip in home sales volume is the clearest indicator the sell phase is ending.

In 2006-2007, the price dropped abruptly, further accelerating within a matter of months. The time for selling preceding a price drop is marked by general optimism about ever-increasing prices. New buyers arrive every day, but in fewer numbers, still expecting unlimited profits on a resale. These late-arrival optimists are unaware of the quicksand beneath their feet.

A savvy investor can see the dramatic fall in home prices coming even before sales volume decreases. As soon as the Fed increases short-term interest rates for 6 months continuously, investors must prepare themselves to sell.

The Fed began raising rates in August of 2004. The yield spread began its precipitous fall just ten months later. It then dipped below the 1.21 spread which portends a recession some 12 months on. On schedule, the upward home sales volume reversed in mid-2005. Nine months later in 2006, again on schedule, home prices peaked and began their nosedive.

When selling is the short-term goal, sellers must be ready to list as sales volume begins to flag. Investigating price levels for comparable properties determines an appropriate listing price, and the acceptable sale price. Equally important, an investor uses this time to locate a broker or agent who will aggressively market the property, locate a buyer and close escrow.

Of course, this theme has variations. Real estate demand is highly localized. Thus, a thorough knowledge of local economics is necessary to accurately pinpoint the real estate phases.

Even when the yield spread is continuously increasing, pockets of high loan-to-value ratio (LTV) mortgage debt and low-income buyers may blunt any future stable price increases. There just isn’t sufficient buyer-occupant demand. This situation is currently observed in Riverside, San Bernardino and much of the Central Valley, though driverless vehicles for commuting are likely to put end to that.

Likewise, regional employment levels can either escalate or kill the profit-making aspects of a buy phase. After all, employment is the basis for a buyer’s ability to take out a mortgage and create demand for real estate. Thus, suburban locations have their own demand issues separate from coastal areas, where job opportunities are most abundant.

When employment is rising but prices remain low, it is time to prepare for a buy phase.

This is the time to:

consider short- and long-term ownership objectives, including what type of property (multi-family, SFR, vacation home, etc.) will meet your goals.

It must be emphasized, of course, that it is ultimately impossible to determine the absolute best moment to take advantage of an economic boom – to sell; or crisis – to buy. Those moments only become realized in hindsight. In this copy, we have identified historical moments of opportunity for the reader’s consideration. However, our forecasted ideal times to sell and buy are only informed opinions, sometimes jokingly referred to as educated guesses. Facts and data can only be derived from the past as they have been experienced.

The actual decision of whether to buy or not depends not only on the economy — which is highly localized — but also on the specific homebuyer, and the seller’s willingness to carry paper.

2018 and the following few years will not be times of untrammeled get-rich-quick investment opportunities. Nonetheless, if you have an eye for long-term market stability in real estate prices, you will be rewarded.